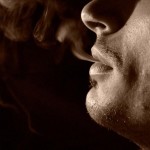 Many cigar smokers relish the smoking experience almost akin to observing a ritual.Â  Unlike cigarette smoking which is done perfunctorily by many, the act of smoking good cigar requires some â€œrespectâ€ for the product.Â  It is not to be seen primarily as an encouragement to smoke but rather to taste a delicacy in occasional opportunities.Â

Whether or not the experience of smoking cigars would be pleasurable would depend on the quality of the cigars and how they are smoked.Â  The process begins with the proper cutting and for the purpose, the use of double guillotine cutters is the most recommended.Â  It is not such a good idea to imitate actors shown in films biting the tip off since jagged edges results to uneven burning of the tobacco and therefore a less than pleasurable smoking experience.Â

The next thing to do is aim for an even light of the cigar either through the use of wooden matches or butane lighters.Â  The use of lighting equipments or items that will lead to the introduction of another flavor or chemical into the cigar such as a scented candle is not recommended.Â  The reason for this is obvious since the main part of enjoying a cigar is getting its real flavor devoid of any other distorting flavor.Â

Lighting a cigar requires the smokers to do a series of puffing and rotating while avoiding the actual contact of the flame to the cigar.Â  This will continue until there is a visible glow around the outer rim of the tobacco from which time smoke is expected to draw easily.Â  Tasting the flavor is done not by inhaling the smoke but by â€œtastingâ€ the smoke in oneâ€™s mouth before it is blown out.Â  There must be a reasonable interval within puffs since going for both extremes as in being too fast or too slow can destroy the whole experience.Â  There are no strict rules as to how far down a cigar can be smoked although taste and the harshness of the smoke is a good indication to stop.