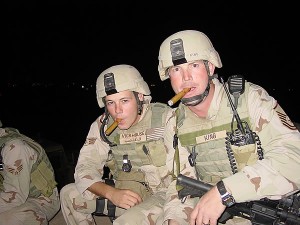 We Americans know how to appreciate those who do things for us, and perhaps the best example would be how we are taught to respect our military men. In the past decade, we have been involved in many wars, most controversial perhaps is the Iraq War. Even today, as the war has been officially over for quite some time, we still have troops in the country, carrying out their orders even if it means being away from their homeland, from their families.

This is something that David Haddad of Fumar Cigars in Phoenix acknowledges, and to show his appreciation, he has gathered 6,000 cigars. Guess where they are headed to? You got it â€“ to the troops in Iraq, who will have the first ever cigar party in a war zone. This is what Haddad has to say about his gesture:

“It’s an honor to the heroes â€¦ because they do what they do (in war) to make it possible so that I get to do what I do … My company offers … cigars to resorts all over the world. It’s to bring a little bit of hospitality to the troops.”

While Haddad is the initiator of this whole project, it would not be possible without the cooperation and generosity of other groups and individuals. As a matter of fact, the cigars (worth $30,000 in all) were donated by over 50 businesses and individuals, showing how we can get together for a good cause. Hereâ€™s to a great cigar party in Iraq!