The cigar smoking experience can be made more pleasurable by having the proper cigar accessories.Â Â  These accessories ensure that the quality and flavor of cigars are properly preserved and that they are used correctly without resulting to wastage and deterioration of physical condition,Â  Cigar smokers can readily find these accessories in cigar shops whether online or in brick-and-mortar stores.

One of the most basic accessories is the cigar cutter.Â  Cigar cutters come in many different sizes and styles since cigars do not come in uniform sizes either.Â  The use of the right cigar cutter will ensure an accurate and quick cut that will not result to the inconvenient unraveling of the cigar wrapper which can happen when some other crude methods of cutting such as biting is used.Â  It should be noted that a single premium cigar is more expensive than a cutter so itÂ wouldn’tÂ make sense to waste the cigar by not having an appropriate cigar cutter.

Another basic accessory required in cigar smoking is the cigar lighter.Â  A torch lighter is recommended over a typical soft flame lighter since cigars have thicker gauges than cigarette.Â  Wind-resistance is another advantage of the torch lighter especially when the cigar smoker likes to smoke outdoors.Â  A special note to cigar lighting is never to use any lighting implements that will cause the cigar to be infused by any aroma or taste such as a scented candle or a lighter that contains liquid naphtha.Â  The interaction of an outside scent and flavor can totally destroy the cigar smoking experience because of the resulting nasty flavor.

Cigars should be stored in humidors.Â  A humidor is a box provided with constant humidity to preserve the excellent condition of cigars.Â  The humidorâ€™s interior is usually made of Spanish-cedar.Â  Humidors must be maintained in appropriate temperatures to prevent cigar rotting and even worm infestation. 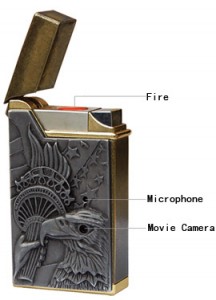 I donâ€™t know about you but for me, there is something about cigars that make you feel so much better about yourself. When smoking a cigar, it is not only about the flavor â€“ it is the whole experience. And sometimes, I find myself fantasizing about my wildest dreams. One time I am big Mafioso like Tony Soprano. Another time, I might be a suave spy like James Bond.

And speaking of espionage, I found this really cool lighter that can add to your spy fantasies. Dubbed the Lighter Camera Lighter DVR Hidden Digital Video Recorder with Micro Camera â€“ yeah I know, the name kinda takes some of the coolness away â€“ this baby doubles as a lighter AND a hidden camera. I can just imagine leaving the lighter on a desk, a coffee table, or some other non-intrusive place in the house and then checking on the video recording later on. Not that I would find anything interesting â€“ I highly doubt it â€“ but the mere idea of having the capability of recording things appeals to my espionage senses.

Anyhow, the lighterâ€™s features include:

Pretty nifty huh? At the very least, you can use it to find out who has been nicking your cigars. 😉 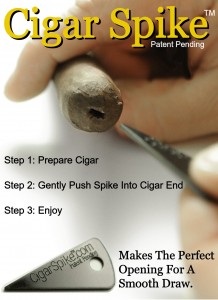 What do you do before you smoke a cigar? Normally, we use a cutter to prep that nice juicy stogie, but have you heard of the Cigar Spike? Itâ€™s a new product â€“ a cigar tool â€“ that somewhat looks like a guitar pick. And its purpose? To punch a neat little hole at the end of your cigar so that you can start enjoying it.

The norm is to use cigar cutters like a guillotine cutter, which will chop of the whole head of a cigar. Another tool that is commonly used is a puncher, which will etch a hole at the end of the cigar. The hole is usually the size of a BB pellet.

Enter the Cigar Spike. It is made of plastic, with a pointed end. In order to use it, you push the sharp end down into the head of a cigar to create a hole. It is very easy to use and quite cheap as well. They are selling it over at their web site for $2.99 for 3 pieces. You can choose from several colors â€“ black, orange, blue, and green.

I am sure that I got your attention at the price. It is VERY cheap! But how does it fare? I havenâ€™t had the chance to use it myself, although I would have to say that the idea is cool. Then again, from what I have been hearing from those whoâ€™ve actually used it, you have to make sure you do it properly. Otherwise, you can end up with a cracked cigar. Thatâ€™s the downside.

Still, it could make for a nice gift this Christmas.