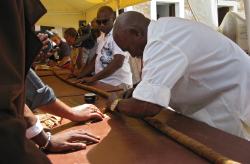 What is the worldâ€™s longest cigar? If you have an affinity for this kind of trivia, you might already know the answer. Then again, you might not have heard of the latest in this area.

Just recently, a Cuban cigar roller broke his own records. Jose Castelar Cairo (Cueto) is not a stranger to the longest cigars in the world. The Caribbean News has this report:

The ceremony was due to take place on Wednesday afternoon during the 29th International Tourism Fair (FITCUBA’09) underway at the Morro-CabaÃ±a Fortress, reported the Opciones online newspaper.

Cueto, rolled his cigar during the 2008 international tourism fair and the record has just been certified by London’s house of world records.

The Cuban roller has made other three universal habanos. The first was a 11.04 meters long cigar, the second one was 14.80 meters and the third one 20.41, all of them registered as Records.

Cueto works in La Triada store, of the Grupo Caracol. He told Opciones that he was very happy with the acknowledgement and that he receives the record on behalf of Cuba, a country known for producing the best cigars in the world.

You know what I like about this story? The guy is not a faker. I mean, he has his records but he continues to work and do what he loves doing. And better yet, he keeps trying to outdo himself and breaking his own records. Iâ€™ll smoke a cigar to that!